The latest FITARA scorecard marked a milestone since the first report in 2015—no agency received a D or an F grade. But fewer agencies improved grades this time around.

For the first time in the five-year history of FITARA scorecard reports, none of the 24 federal agencies reviewed received failing grades.

But the tenth scorecard, released Monday ahead of a scheduled House Oversight and Government Operations subcommittee hearing, showed agencies still have work to do on complying with the Federal Information Technology Acquisition Reform Act, which requires chief information officers report to agency leadership and sets other IT modernization metrics.

Only one agency—the General Services Administration—received an A+ grade on the scorecard. The U.S. Agency for International Development maintained its A grade. One agency, the Education Department, dropped out of the A-range. It dropped a full letter grade from the December 2019 scorecard, falling to a B this time around.

Nine agencies posted in the B range and the majority of agencies passed with C grades. While seven agencies improved their scores, 14 stayed the same and three posted lower scores compared to the previous report. 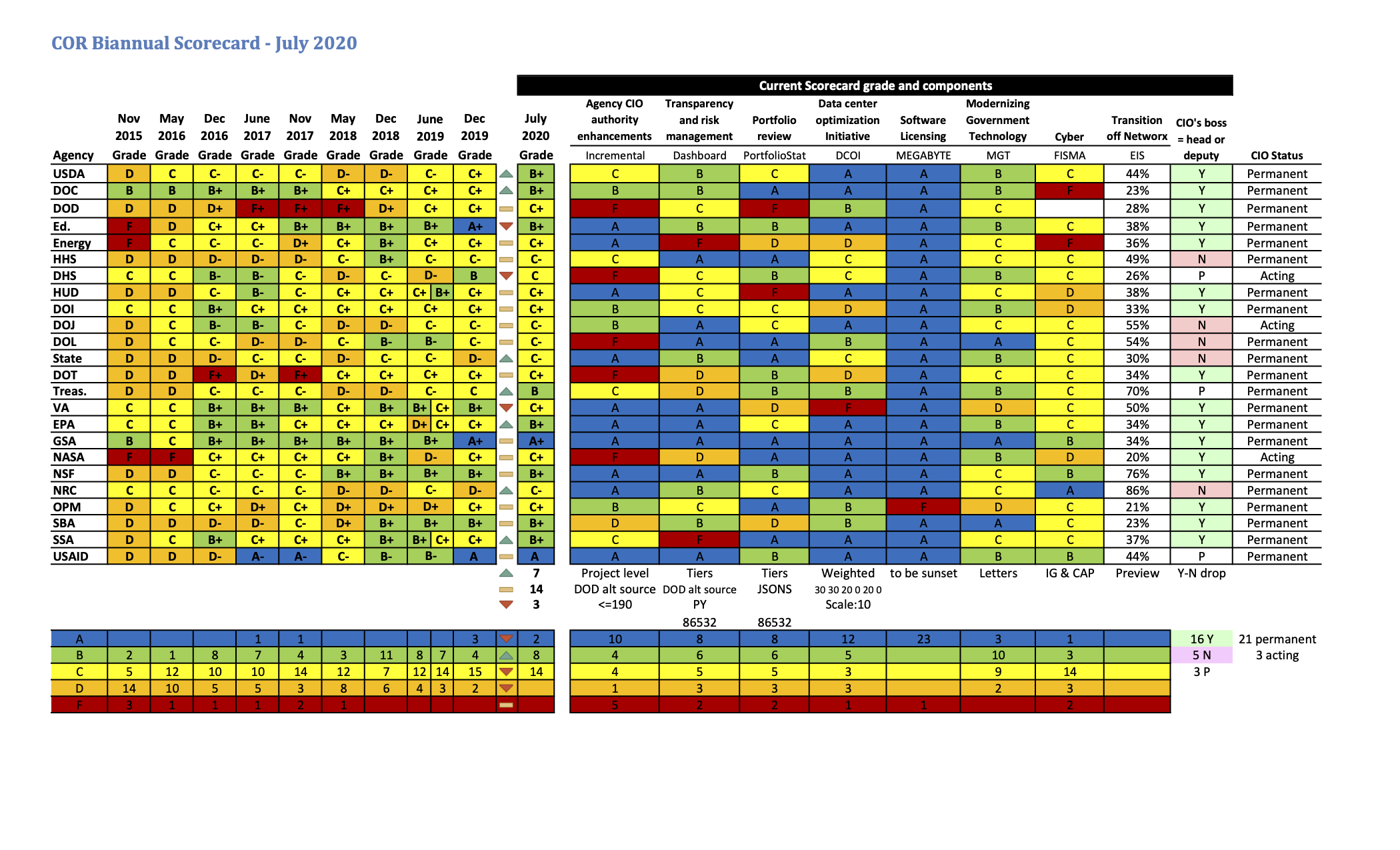 “This achievement is a testament to the hard work of federal agencies’ chief information officers and also a testament to, I think, this committee and subcommittee’s steady and bipartisan oversight of FITARA since its enactment in 2014,” Connolly said.

Both lawmakers emphasized the subcommittee will continue with its scorecard reports as well as keep the metrics on which agencies are graded up to date. The first scorecard had just four categories; it has since expanded to include ten.

“We need to continue to update the metrics, so that they better and more effectively match the IT management and implementation practices that are actually being used today,” Hice said.

Critically, a third of agencies have failed to ensure their chief information officers report directly to the head or deputy head of the agency, Carol Harris, director of IT management issues at the Government Accountability Office, said at the hearing. Changing the leadership structure within agencies in order to give CIOs actual decision-making power is FITARA’s chief innovation and is critical to ensuring CIOs can do their jobs properly.

Richard Spires, former CIO at the Homeland Security Department and the Internal Revenue Service, agreed with Harris. He saw both sides of the coin: at DHS, he did not report to the secretary or deputy secretary of the agency, whereas at IRS, he reported to the commissioner.

“I would say that in my view, I was able to be more effective—significantly more effective— because I had a good relationship with the head of the agency,” Spires said about his position at the IRS.

“These two actions and the associated higher grades are possible by the next scorecard,” Harris said.

Editor’s note: This story was updated to correct an error in the scorecard.