In simultaneous press releases, the social-media companies say they have shut down large amounts of Beijing-controlled activity.

Twitter and Facebook officials said on Monday that they have shut down hundreds of accounts linked to the Chinese government and used to spread misinformation about pro-democracy protests in Hong Kong.

In a statement, Twitter officials said they had identified 936 accounts that were coordinating attacks on the protest movement and its leaders. But those were just the most active of what Twitter called a “larger, spammy network” of potentially 20,000 accounts.

“Overall, these accounts were deliberately and specifically attempting to sow political discord in Hong Kong, including undermining the legitimacy and political positions of the protest movement on the ground,” the Twitter statement said.

Facebook issued its own statement simultaneously, saying that it had removed seven pages, three groups, and five Facebook accounts tied to the same Chinese state-sponsored information campaign. Some “15,500 accounts followed one or more of these Pages and about 2,200 accounts joined at least one of these Groups,” Facebook officials said in the statement. “The individuals behind this campaign engaged in a number of deceptive tactics, including the use of fake accounts — some of which had been already disabled by our automated systems — to manage Pages posing as news organizations, post in Groups, disseminate their content, and also drive people to off-platform news sites.”

Some of the posts likened the Hong Kong protestors to terrorist organizations such as ISIS. One post painted the protesters as cockroaches. 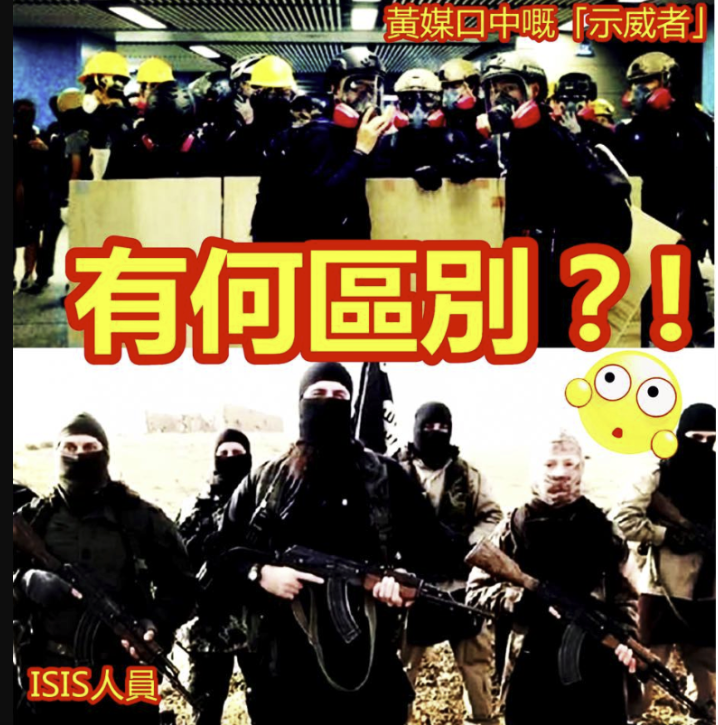 Posts that Facebook has identified as part of a Chinese, state-backed effort to attack protestors in Hong Kong.

The Hong Kong protests represent a first major test for the Chinese government’s nascent social media operation. It’s not known how many people are involved, but at least one estimate cited by cybersecurity and intelligence company Recorded Future in March said that a half million people in China could be working for the government to influence Chinese speakers around the world. The report estimated that 18 percent of the social media posts in China came from government sources.

Despite the size of the Chinese social media manipulation operation, evidence from Twitter and Facebook suggests it’s not yet very sophisticated.

“Twitter is blocked in the [People’s Republic of China], many of these accounts accessed Twitter using VPNs [virtual private networks]. However, some accounts accessed Twitter from specific unblocked IP addresses originating in mainland China,” the Twitter statement said, which suggests that some of the protestors effectively forgot or did not know that Twitter was blocked when they posted.

Multiple observers have been pointing to rising efforts by the Chinese government to influence the global conversation about the protests. Computer scientist and former Facebook chief security officer Alex Stamos has shown that some of China's efforts reek of amateurism.

The weakness of the Twitter troll campaign around #HongKongAirport demonstrates why the Russian Internet Research Agency spent years building realistic personas. Nobody is buying 1 follower and the 1 post on HK protesters being violent. pic.twitter.com/zVhO6F7eer

But the overall size of the Chinese government's effort remains unknown.