The new metric on software licensing knocked many agencies' grades down.

The scorecard, which will be revealed at a House Oversight and Government Reform IT subcommittee hearing Nov. 15, indicates six agency scores dropped, three went up and 15 remained the same since they were last assessed in June.

The Education Department, Small Business Administration and Office of Personnel Management were the lone agencies to increase their scores, while scores in the departments of Energy, Homeland Security, Housing and Urban Development, Justice and Treasury, as well as the Environmental Protection Agency, declined.

This version of the scorecard includes a new metric—software licensing under the MEGABYTE Act—that agencies generally scored poorly on. Only seven agencies avoided an F in software licensing, indicating they at least have an inventory of their software licenses. When the topic was included—but not factored into—June’s scorecard, only three agencies had software libraries, so agencies appear to be moving in the right direction. 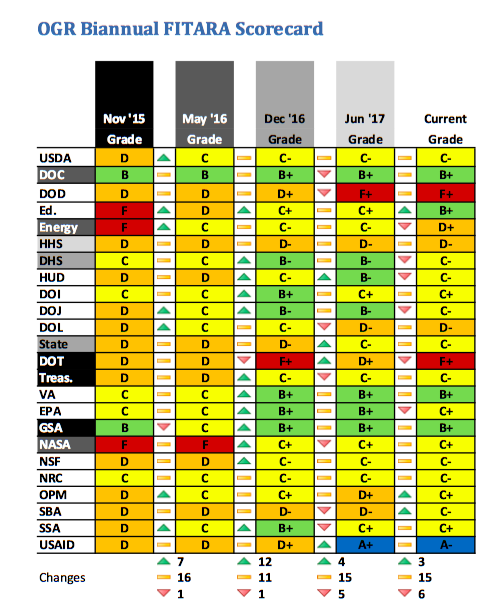 Eighteen agencies have permanent chief information officers and six having acting CIOs, according to the new scorecard.

Agencies with acting CIOs include the departments of Commerce, Defense, Treasury, and Agriculture, as well as the EPA and National Science Foundation. In recent months amid significant turnover to the CIO ranks, as many as eight agencies have been helmed by CIOs in acting capacities, according to the previous scorecard.

There were no changes in the IT reporting structure from June scorecard, with 12 CIOs reporting to a secretary or deputy secretary and 12 reporting elsewhere. One of FITARA’s requirements is that CIOs report directly to agency leadership.

Wednesday’s hearing is expected to feature a series of CIOs, chief financial officers and deputy secretaries.

NEXT STORY: Women in Tech Are Rising Higher in China Than in the U.S.