The Army Research Lab, the Project Maven team, and the Defense Department’s Joint Artificial Intelligence Center will host technology companies later this month in Maryland, where the government will view private demonstrations. According to federal contracting data (free login required for the full list), large tech companies such as Intel, IBM, GE, Oracle, as well as defense company Raytheon, have expressed interest in showing off their AI for the military.

Absent from the list are AI giants such as Google, Microsoft, and Amazon, though the DoD has not responded to an inquiry as to whether the available contracting data is the complete list of attending organizations.

The DoD’s needs aren’t too different from those of a Silicon Valley tech company, though the technology is unlikely to be used in a food delivery app or search engine. The military is looking for help organizing and standardizing its data, tools to create AI algorithms, and infrastructure to test and deploy those algorithms. Some of the military’s uses are similar to commercial applications for AI, like predictive maintenance and translation, though other use cases include analyzing drone footage and “force protection,” which means mitigating potential threats to the military. Project Maven, in particular, is focused on tech that autonomously extracts information from still or moving imagery. 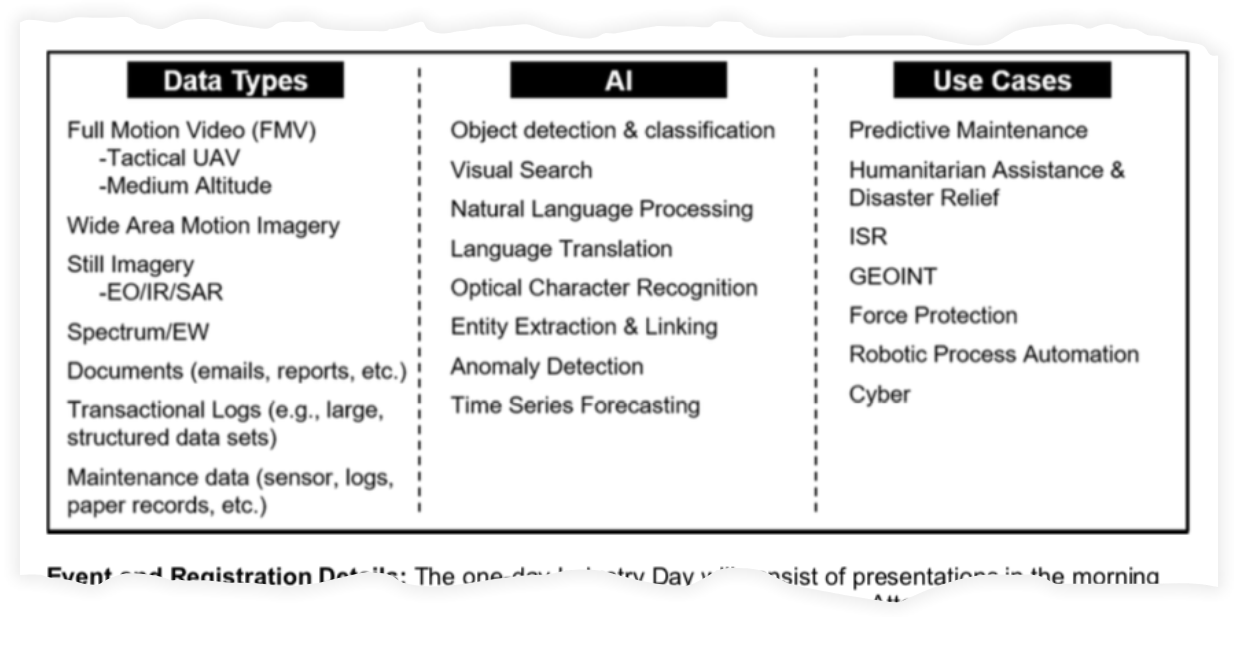 Smaller, more specialized tech firms from outside of Silicon Valley are also vying for government contracts. Descartes Labs, which uses artificial intelligence to analyze satellite imagery, is planning to attend the industry day and give a demo. Descartes Labs’ government programs director, Steven Truitt, tells Quartz the company plans to discuss a super-computing platform for the intelligence community and “defense information awareness missions.”

A competitor, Orbital Insight, has also indicated interest in the event.

Of the 42 businesses interested in attending the event, six are owned by veterans, according to the contracting documents. John Merrihew, VP government solutions at AI contractor Veloxiti, says his military experience puts him in a different category of tech company than Silicon Valley.

“I’m an Army retiree after 24 years and a half-dozen combat tours, so I have an obligation to [provide this technology],” Merrihew told Quartz. “I’m not a guy out on the west coast who’s made a lot of money like Google. All of my engineers have security clearances, so we’re pretty bought in on trying to help the military in this area.”