By Bob Brewin,
Editor at Large

This is the thirteenth story in an ongoing series.

Over the past decade, the Veterans Affairs Department spent $717 million for an anti-psychotic drug to treat post-traumatic stress disorder that a recent study shows is no more effective than a placebo.

Data provided by the department in response to a Nextgov query showed that VA doctors wrote more than 5 million prescriptions for risperidone from October 2000, the beginning of fiscal 2001, through June 2010. Risperidone is the generic name for Risperdal, a second-generation anti-psychotic drug originally developed by the Janssen Pharmaceuticals division of Johnson & Johnson to treat severe mental conditions such as schizophrenia and bipolar disorder.

But a paper by VA researchers published Aug. 2 in the Journal of the American Medical Association concluded, "treatment with risperidone compared with placebo did not reduce PTSD symptoms."

That paper, whose lead author is Dr. John H. Krystal, director of the clinical neurosciences division of VA's National Center for PTSD, concluded: "Overall, the data do not provide strong support for the current widespread prescription of risperidone to patients with . . . military-related PTSD symptoms, and these findings should stimulate careful review of the benefits of these medications in patients with chronic PTSD." The study included 193 Vietnam veterans and 63 Iraq and Afghanistan veterans.

While the paper focused on risperidone, it also questioned the effectiveness of other second-generation anti-psychotic drugs, including Seroquel, also known by its generic name quetiapine. VA told Nextgov it spent $846 million on Seroquel over the past decade for more than 6.6 million prescriptions.

Besides prescribing Seroquel for use as an anti-psychotic drug, both VA and Defense Department physicians prescribe it as a sleep aid, despite the fact the drug has been implicated in the deaths of two Marines who took large doses of it.

Though the Food and Drug Administration has approved risperidone only for treatment of schizophrenia, bipolar disorder and irritability associated with autistic disorder in children and adolescents, clinicians are free to prescribe it as they see fit, a practice known as "off-label" use.

While the paper on risperidone published earlier this month reported the results of the first large trial measuring the effectiveness of second-generation anti-psychotics in the treatment of PTSD, previous research found little evidence the drugs were effective and VA's own clinical practice guidelines , first published in 2004, when the department spent $66 million on risperidone and $56 million on Seroquel, warned against using the drugs to treat PTSD.

Those guidelines, still in force today for both VA and Defense, cautioned "there is insufficient literature to recommend the use of atypical anti-psychotics (olanzapine, quetiapine, risperidone, ziprasidone, aripiprazole) to recommend their routine use in PTSD."

Douglas Leslie, a professor at Penn State College of Medicine's department of public health sciences, conducted a study of 279,778 veterans who had received off-label prescriptions for anti-psychotic drugs for PTSD treatment in 2007. The veterans were most often prescribed Seroquel, followed by risperidone.

In a 2009 paper , he concluded, "The scientific evidence supporting the effectiveness of off-label anti-psychotic medication use is weak for most conditions, including depression and PTSD -- conditions with relatively high rates of off-label use in our study."

Teresa Mueller, a Janssen spokeswoman, said, "The treatment of post-traumatic stress disorder with Risperdal (risperidone) is not approved by the FDA, and as such, we do not promote its use for this medical condition."

But the company is under investigations by the Justice Department and several state attorneys general for its sales and marketing practices regarding Risperdal, according to Johnson & Johnson's quarterly report filed July 3 with the Securities and Exchange Commission.

According to the report, the company in 2004 "received a subpoena from the Office of the Inspector General of the United States Office of Personnel Management seeking documents concerning sales and marketing of, any and all payments to physicians in connection with sales and marketing of, and clinical trials for, Risperdal from 1997 to 2002. Documents subsequent to 2002 also have been requested by the Department of Justice."

The Johnson & Johnson report also identifies lawsuits filed by eleven states related to sales and marketing of Risperdal for off-label use. 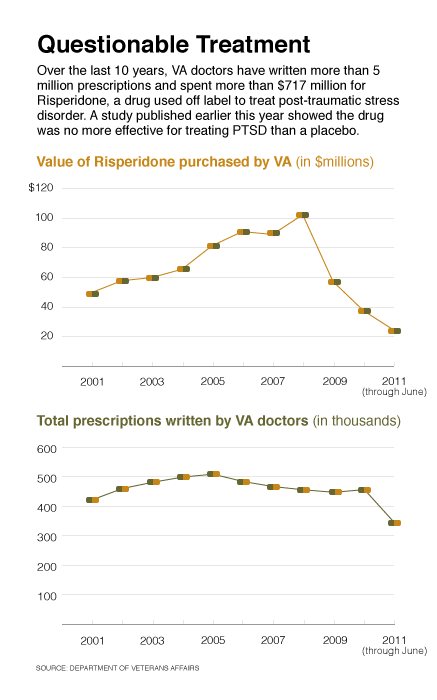