Legal experts and human rights advocates say they were not told about the databases and question their reliability.

With scant public notice, federal immigration officials are relying on databases run by foreign police and militaries to check whether migrants crossing the United States border have gang affiliations, which would allow officials to detain and eventually deport them.

The information is being provided through a new “fusion” intelligence-gathering center in El Salvador that is funded by the State Department and works in tandem with the Homeland Security Department.

But legal experts and human rights advocates say the government has kept the use of databases at the border largely secret, subverting potential challenges to the reliability of the information in them. An attorney in Texas recently discovered that her Salvadoran client had been falsely accused of being in the MS-13 gang based on intelligence from the center. The man was jailed in a maximum-security facility for violent criminals for six months, and his two children were taken away.

Government attorneys, pressed repeatedly in court to provide evidence, eventually dropped the allegation of gang membership against him without explanation.

Officials at U.S. Customs and Border Protection declined to answer questions about the fusion center, including where and how often the gang intelligence is being used along the border and whether it has been the cause of other family separations.

The fusion center was created in May 2017 as part of a multinational initiative called Grupo Conjunto de Inteligencia Fronteriza, or GCIF, and funded through the State Department’s Bureau of International Narcotics and Law Enforcement Affairs, which supports border security and police and military training programs in Central America as part of the U.S.-funded Central America Regional Security Initiative.

Very little is publicly known about the center, based in San Salvador, but in testimony before the House Homeland Security Subcommittee in January 2018, Richard H. Glenn, then an acting deputy assistant secretary of state in the bureau, said that several Salvadoran police officers had been sent to the border in McAllen, Texas, for eight months in 2017 to “conduct research and report information to DHS” and to “help DHS, state and local law enforcement identify, arrest or deny entry to gang members.”

Salvadoran gangs, especially MS-13, have been a frequent fixation for President Donald Trump who has referred to them as “animals” who “pour into and infest our country” despite the gang’s relatively small presence in the United States. At the Justice Department, former Attorney General Jeff Sessions directed prosecutors to aggressively pursue gang-related immigration offenses.

But legal experts and human rights advocates said the reliance on Salvadoran police as analysts at the fusion center raises a host of troubling questions, including how the analysts are vetted and whether the gang intelligence is verified before being used by U.S. immigration officials to deny asylum-seekers.

“There’s a lot of gang infiltration and influence on the police force in El Salvador,” said Geoff Thale, vice president of programs for the Washington Office on Latin America, a nonprofit human rights group.

“Do I think there’s retaliatory data that gets entered because cops are pissed off at somebody or because a street guy is paying off a cop to only put down names of his rivals on the gang list? Yeah, I think that’s very likely,” said Thale, who has worked on issues involving human rights, security and law enforcement in El Salvador since the mid-’80s.

In 2018, after then-Homeland Security Secretary Kirstjen Nielsen and Vice President Mike Pence visited Central America in the wake of the family separation crisis, the center, at their urging, was expanded to include intelligence from Honduras, Guatemala and Mexico. In an email, Noel Clay, a State Department spokesperson, would not specify what type of information was being shared, only that it “comes from the criminal and intelligence databases of each participating country.”

Every analyst working at the center is vetted as required by law, according to another State Department spokesperson who declined to provide his name. But critics of the vetting process say that it isn’t transparent, and that human rights violations still occur. An investigation by the United Nations in 2018 found that U.S.-funded police forces in El Salvador had falsely accused people of gang membership and committed extrajudicial killings. The State Department, in its 2018 “Country Report on Human Rights Practices in El Salvador,” noted extensive police involvement in arbitrary arrests, torture and extrajudicial killings.

In the United States, gang databases have long been criticized for disproportionately targeting people of color and for containing false or retaliatory information, which is difficult to remove from a person’s record, even with proof of innocence.

“These are internal police lists and not public,” Thale said. “I would be shocked if there’s a way to clear your name from the database in El Salvador, because most of the time you can’t even do it here in the United States.”

Clay, the State Department spokesperson, said if a person is falsely accused of membership in a gang as a result of information from the center, it would be up to each country’s law enforcement agency to correct the problem. “This is because the information shared through the GCIF platform is proprietary information owned by the host country,” Clay said.

Efrén Olivares, an attorney with the Texas Civil Rights Project who has worked on hundreds of family separation and asylum cases, said that what the State Department is asking is impossible. “The whole reason people seek asylum is because their own government can’t protect them or is complicit in the violence,” he said. “Returning home is not an option.”

The fusion center has also begun expanding its gang intelligence network into the United States by working with local police departments. Analysts have worked with police in Chelsea Massachusetts, and the Suffolk County Police Department on New York’s Long Island, Clay said. Glenn, in his testimony before congress, said the Suffolk County police submitted a list of 454 people suspected of having a gang affiliation to the center. Analysts then identified and provided the Police Department with “potential residential locations of known gang members and individuals wanted in El Salvador,” he said.

Several immigration attorneys representing asylum-seekers along the border said they were unaware of the existence of the fusion center and now wonder how often its intelligence is being used — and whether it may be wrongly labeling migrants as criminals.

Last year, ProPublica wrote about the case of Julio, a migrant from El Salvador who was separated from his 4-year-old-son in McAllen, Texas, after the Border Patrol alleged that he was in a gang. Julio’s attorney, Georgia Evangelista, said immigration officials never told her what evidence they had to support the allegation, nor did they explain where they got the information. Evangelista challenged the allegation during a court hearing in Julio’s asylum case. But the government attorneys said they couldn’t discuss the evidence because it was confidential.

Eventually, Julio was released on a $8,000 bond and reunited with his son. Since the asylum hearing, the government has dropped any mention of the gang allegation. “If they want to accuse him of being a gang member, they have to tell us what the evidence is so that we can properly respond,” Evangelista said recently. “I don’t believe there is any evidence. That’s why they’re not making the allegation anymore.”

Attorney Laura Peña, who represents Carlos, the 36-year-old Salvadoran man accused of being in MS-13, only discovered the center by chance after an official charged with overseeing family shelters referenced it in an affidavit in his case. The official said the information identifying him as a gang member came from El Salvador and had been put into a “U.S. database” by the State Department.

The mention of the database piqued Peña’s interest as a former State Department employee. Peña said that information sharing between U.S. immigration officials and Central American countries has taken place for years, but that it has largely been limited to people with active arrest warrants and criminal convictions for use in deportation proceedings. The difference now, Peña said, is that it is being used to ferret out alleged gang members and separate families. 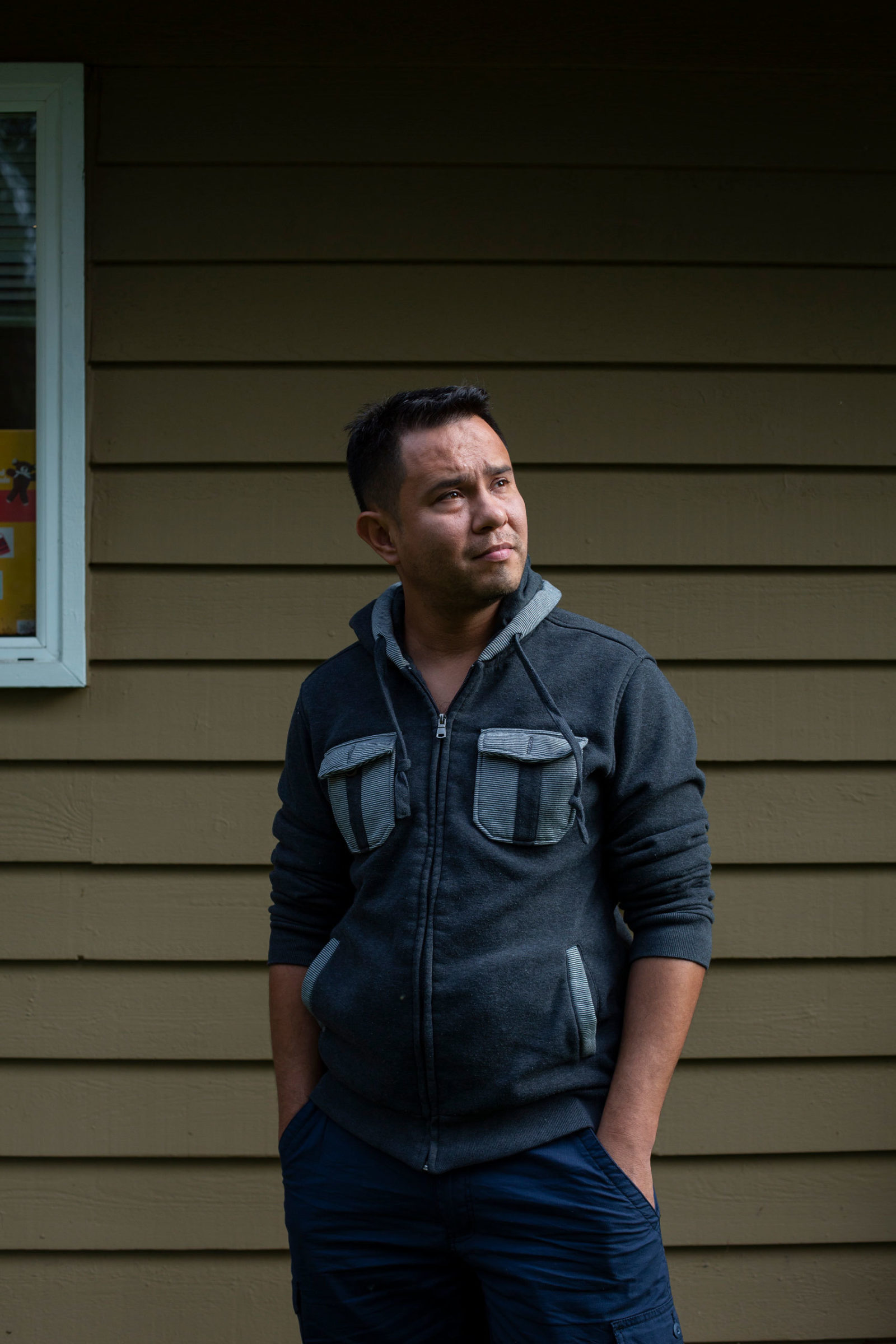 Carlos, near his home in Washington state, was falsely accused of being a member of MS-13 based on intelligence from the center in El Salvador. (David Ryder, special to ProPublica)

Like Julio, Peña’s client, Carlos, was separated from his children after agents said a background check showed that he was a gang member. Carlos and his two children, ages 7 and 11, had arrived in South Texas seeking asylum five months after Trump signed an executive order ending family separations and after a federal judge ruled that families could only be separated if a parent is mentally unfit or a danger to the child.

Peña believes the Trump administration is using the new gang intelligence initiative to undermine the intent of the judge’s ruling, so it can quickly deport more families. Once a person is flagged as having a gang affiliation, they are fast-tracked for removal.

Carlos, who asked that only his first name be used because he fears persecution from gangs in El Salvador, said he told the agents he’d never been in a gang and provided them with an official letter from the Ministry of Justice in El Salvador certifying that he had no criminal record. He also gave them a letter from his former employer of several years vouching for his good moral character, he said.

The agents didn’t believe him, he said, and searched him repeatedly for gang tattoos. “I told them I’ve never been in a gang,” Carlos said. “And the agent said your government is saying you are. I asked him to show me the information.”

The agents refused, he said and told him “because I was a gang member my children couldn’t be with me anymore,” he said. “And after I was deported, my children would be put up for adoption.”

Peña and another pro bono attorney challenged Carlos’ detention and the family separation in federal court in Washington, D.C., on constitutional grounds, which prevented Carlos from being immediately deported without his children. Peña said they only discovered the false intelligence from El Salvador because they’d gone to court, which does not happen in most family separation cases. During the hearing, government attorneys maintained that since Carlos was flagged by databases as a member of MS-13, he should be deported.

After six months in a jail in Laredo, Texas, and extensive negotiations with government attorneys, Carlos was finally granted a chance to file for asylum. He was released on bond in May after passing his credible fear interview. At the bond hearing, the government attorney made no mention of the gang allegation and agreed to his release. Throughout, Peña said the government attorneys never provided the evidence linking Carlos with MS-13.

The Justice Department and Immigration and Customs Enforcement did not respond to ProPublica’s requests for comment.

Both Carlos and Peña worry that the gang allegation still remains somewhere in his government file.

Carlos, now reunited with his two children, said he wants to clear his record, but he doesn’t know how, and he can’t return to El Salvador because it would be a death sentence. “I came here seeking protection and because I had no other choice,” he said. “And I was accused of being in a gang, when I was fleeing the gangs, all based on evidence I’ve never seen.”

This article was originally published in ProPublica. It has been republished under the Creative Commons license.  ProPublica is a Pulitzer Prize-winning investigative newsroom. Sign up for their newsletter.