Critical Update: How the Coronavirus is Changing Federal Work

Critical Update: How the Coronavirus is Changing Federal Work

The U.S. Postal Service is once again America’s favorite federal agency, winning the title in a Gallup survey for the third consecutive year.

About three-quarters of Americans said the mailing agency is doing an excellent or good job, according to the survey, compared to just 8% who said it is doing poorly. USPS has won the highest marks each time Gallup has conducted the poll, the latest iteration of which it released on Monday.

The Secret Service was just behind the Postal Service, with 69% of respondents giving the agency positive marks. The Centers for Disease Control and Prevention, CIA and NASA rounded out the top five, each winning approval from at least 60% of Americans.

The Veterans Affairs Department saw the worst marks in the survey for the fourth consecutive time. Just 39% of respondents said VA does an excellent or good job, while 59% said it was doing an “only fair” or poor job. The Environmental Protection Agency, Food and Drug Administration and Federal Reserve Board joined VA as the only agencies to fail to receive positive reviews from a majority of Americans. 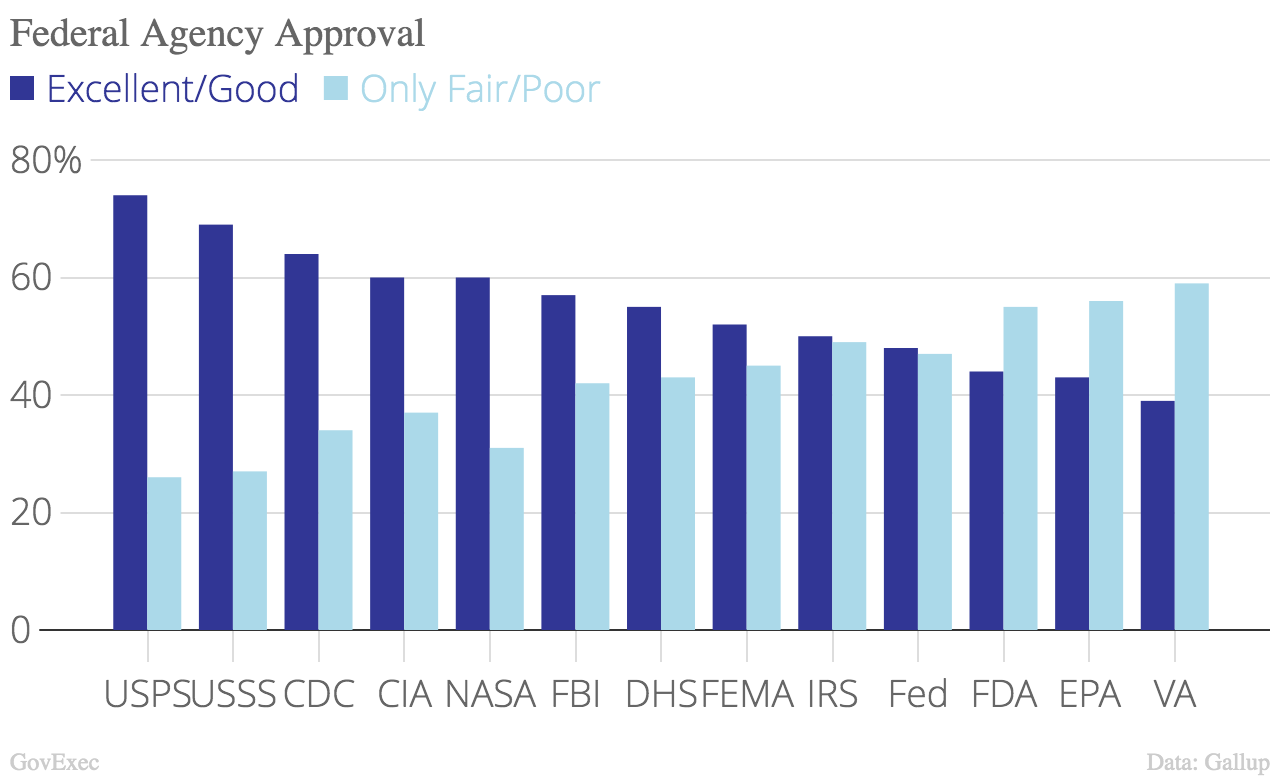 Across the 13 agencies measured, 55% of Americans gave favorable ratings. That is up from 47% in 2014, but stable since 2017. Gallup attributed the longer-term change to improved Republican views since President Trump entered office.

That was especially true at the Federal Emergency Management Agency, which nearly two-thirds of Republicans view favorably compared to just 38% of Democrats, and the whole of the Homeland Security Department, which saw a 23-point approval gap between respondents of the two parties. The FBI, meanwhile, saw 66% approval from Democrats and just 46% from Republicans.

Support for the Postal Service, CIA and NASA were largely bipartisan. There was virtually no gap between the slight majority of both Republicans and Democrats who approved of the Internal Revenue Service.

Americans’ trust in government writ large dropped to a new low in January, according to a separate poll from Gallup. However, Americans tend to view individual agencies positively.

“Public faith in many of the specific federal agencies charged with doing the nation's business remains quite strong, similar to the levels seen in 2017 and generally improved from 2014,” Gallup wrote in a summary of its findings.

Gallup polled a random sample of 1,024 adults across the country from April 17-30 with a margin of error of plus-or-minus 4%.