The Education Department's FAFSA Twitter account Tuesday posted and quickly deleted a tweet that caused quite a backlash from followers who found it tone deaf and offensive to lower-income college students.

In an attempt to connect with teenagers and fans of the Academy Award-nominated 2011 film "Bridesmaids," the @FAFSA account posted a screenshot from the film with Kristen Wiig's dialogue -- a drunk plea of "Help me. I'm poor." -- over the image and text saying, "If this is you, then you better fill out your FAFSA: fafsa.gov." 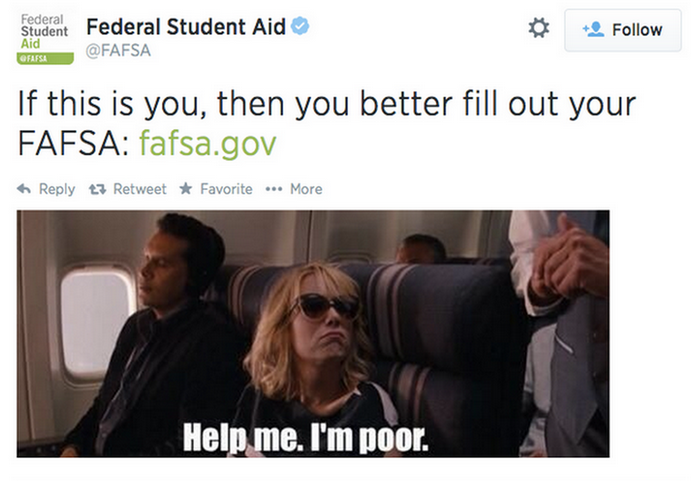 The tweet immediately caused a torrent of negative reactions from followers.

Unbelievable. Take this down. RT @FAFSA : If this is you, then you better fill out your FAFSA: http://t.co/EOB70Eucam http://t.co/3Y7ilKsqTB

If I didn't hate @FAFSA enough before, that tweet definitely did it. There is nothing amusing about not being able to afford your education.

Hey @fafsa , I relied on you during my entire college career and still have hundreds in loans to pay each month. It's never funny.

@FAFSA honestly that tweet was very offensive...give me an extra 6k and we can act like you never offended me

@FAFSA Your marketing to young people using memes, which are popular among young people. I think you have little to nothing to apologize for

@FAFSA you better be!

According to the Education Department, 85 percent of college students use some form of financial aid to cover college bills. The Obama administration and Education have been trying to publicize the FAFSA program in recent months. In March, Obama told every high school student to fill out the form, even if they think they may not qualify.

"Even if you think you might not qualify for financial aid, fill out the form. You might qualify," the president told students at an event at a Florida high school.

Social media is part of that process as well, with a FAFSA Facebook page posting daily and the @FAFSA account using graphics. The Tuesday tweet appears to be a foray into speaking in teenagers' language, as an earlier use of a photo of a kitten -- the Internet's favorite animal -- in a tweet in March.

Wednesday morning, a Department of Education spokeswoman told Inside Higher Ed the department is sorry for the tweet and will look into its social media processes going forward.

"It was an ill-conceived attempt at reaching students through social media," Dorie Nolt said. "We are reviewing our process for approving social media content to ensure it reflects the high standards we expect at the U.S. Department of Education.”

NEXT STORY: Hurry! Nominate Your Rock Star Colleagues for the 2014 Bold Awards