NOAA is tweeting more since the shutdown hit, while the VA holds steady.

Government Twitter accounts are posting at about one-third their normal pace since the partial federal shutdown began last week, but a handful of agencies are doing most of the heavy lifting.

Most federal agencies stopped tweeting entirely once the shutdown began, according to data provided by Measured Voice, a social media consultancy.

While the average decrease in Twitter traffic across the government is about 35 percent , the median decrease -- meaning the middle agency if they were all lined up from the greatest decrease to the least -- is about 95 percent, Measured Voice President Jed Sundwall said.

The Environmental Protection Agency is a good example. The EPA’s 35 Twitter accounts all effectively went dark on Oct. 1, the first day of the shutdown, according to a Measured Voice graph.

“Most Twitter accounts that we look at look more or less like the EPA's accounts,” Sundwall said. “They're lights out after the shutdown.”

The largest exceptions to that general rule are the Veterans Affairs Department and the National Oceanic and Atmospheric Administration.

VA, which is mostly funded on a two-year cycle and initially only furloughed 4 percent of its staff, has continued to tweet at roughly the same level as before the shutdown from its 76 Twitter accounts. There’s a spike above normal levels on shutdown day, which Sundwall attributed to VA hospitals alerting the public that they would remain open. VA this week announced more furloughs and warned of additional budget shortfalls by the end of the month.

NOAA’s 49 accounts have actually been tweeting more since the shutdown than before it, Sundwall said. Some of that increase is due to tweets about Tropical Storm Karen, which dissipated off the Gulf Coast before reaching land on Sunday, Sundwall said. The agency also registered about a dozen new Twitter handles between the last week in August -- which Measured Voice used as its pre-shutdown comparison week -- and the beginning of October, Sundwall said. So some of the increase is simply due to more profiles tweeting.

The State Department furloughed only a handful of employees but is tweeting at about half its normal rate for reasons that are unclear, according to a Measured Voice graph.

One final anomaly is the Twitter handle for the U.S. Bankruptcy Court , which usually tweets a few times a week but tweeted 10 times on Oct. 3, the third day of the shutdown. The tweets all announced estate sales due to bankruptcy and appear to be running on autopilot, Sundwall said.

Measured Voice built the Federal Social Media Registry , which the government uses to verify its hundreds of social media profiles across Twitter, Facebook, YouTube and other social sites under contract with the General Services Administration. The company’s measurements of agencies’ tweeting uses a public data stream connected with the social media registry. 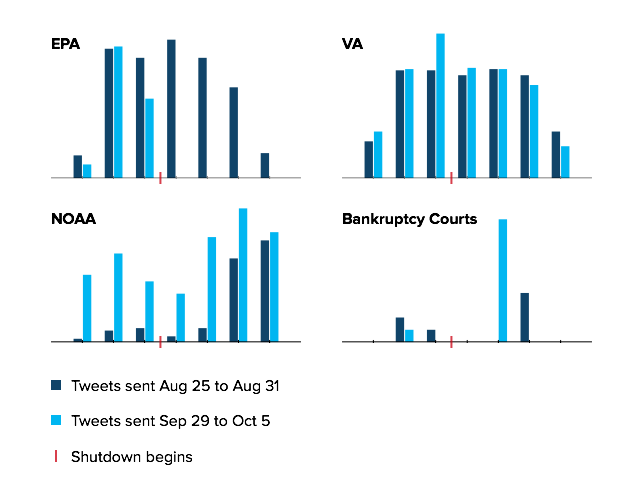 Graphs, provided by Measured Voice, are scaled and unlabeled to show relative amont of tweets between weeks, not to show precise number of tweets. Data from GSA's Social Media Registry.