Federal obsession with innovation is rampant.

The government appears intent upon emulating a Silicon Valley-style startup culture that can keep up with the evolution of commercial technology—or at least shake up how agencies approach problems. Its efforts include the Presidential Innovation Fellows program, a one-year tour of duty lawmakers are attempting to make permanent; the digital consultancy 18F, which aims to help other agencies buy agile software development; and a rash of incubator-style hubs where employees can build out their own ideas.

It’s within this broader effort a handful of agencies have hired chief innovation officers—occasionally, private-sector recruits from companies such as Google, who are tasked with infusing federal agencies with a sense of creativity. Earlier this month, Defense Secretary Ash Carter announced plans to establish a chief innovation officer position at the Pentagon at the behest of the newly created Defense Innovation Board, whose members include Amazon CEO Jeff Bezos and Google Executive Chairman Eric Schmidt.

Today, federal chief innovation officers are significantly less common than the emerging role of chief data officer, which Nextgov investigated in a special report last year. And responsibilities associated with the title vary widely between agencies. Some have direct budget authority; others are expected to focus largely on changing the culture of a federal organization—encouraging employees to bring their own ideas to higher management, for instance.

It’s unclear whether chief innovation officers will ever have a more standardized job description and authority like chief information officers do, and whether the obsession with innovation will continue. A 2015 Deloitte and Partnership for Public Service survey found federal employees across agencies felt their organizations were less innovative than they were in 2010; less than one-third said creativity and innovation were rewarded in their offices.

And because many innovation-themed initiatives were pioneered by the Obama administration, their longevity is uncertain under President-elect Donald Trump.

Still, at least one expert thinks they’re essential for government. Bill Eggers, executive director of Deloitte's Center for Government Insights, told Nextgov chief innovation officers could help institutionalize the kind of creative problem-solving that traditionally happens “at the edges of an organization, not at the center.”

“You’ve got skunkworks groups, safe havens and individuals who’re given the freedom to innovate and be disruptive and find wholly new ways of doing something,” Eggers said. “Because the core [of an organization] will always swallow things up, and it’s used to doing things like it always does, and you can’t have disruptive innovation at the core.”

“Most chief innovation officers are spending a lot of time externally on bringing in outside innovation,” Eggers said. The most effective ones, he added, are “people who understand what’s going on in the private sector, who can understand the startup world and connect it into social enterprises and nonprofits and get government at the same time, and understand cultural transformation and how that works, and are willing to take risks.”

Nextgov interviewed four current and former officials specializing in innovation for the first time in a series focused on formalizing creative thinking in the federal government.

A major part of Sivak’s mission at HHS was encouraging employees to submit their own ideas to solve problems facing the organization. He helmed the HHS IDEA Lab, an accelerator-style program that provided funding and mentorship to employees with solutions to internal problems; one such team developed a fast-tracking software for patients in emergency rooms.

At HHS, Sivak’s responsibilities as CTO were relatively vague, and it wasn’t always clear how he’d be evaluated, he said. When Sivak was hired, he was presented with a document listing 121 different goals, which “really meant we had no goals at all,” he says.

Broadly, Sivak was expected to “harness external innovation and technology and data to help move the health care ecosystems forward," he said. "How can we better execute on our mission as an overall department? A big part of my job at HHS was enabling people on the inside to recognize their own ability to execute on ideas they have had.”

As chief innovation officer in Maryland, Sivak was given very clear goals and metrics: reduce childhood hunger in the state by 2015, for instance.

“We decided was that my focus in this role would really be to help achieve progress,” he said.

At the state level, Sivak's measurable impact would be his ability to deliver on those goals at a faster rate, he explained.

At HHS, innovation-related programs were “never as really well funded or really organized in terms of the attention that it should have been paid,” but, generally, “we managed to make it work pretty well,” Sivak said.

Asked whether all federal agencies should have officials dedicated to innovation, Sivak said he didn’t think any positions should be “defined as needing to exist … the roles that people play in a given organization are going to be very determined by the organization itself.” With a “particularly forward-thinking leader who understands the value of that type of thought, then yes. If it’s the opposite, don’t bother.” 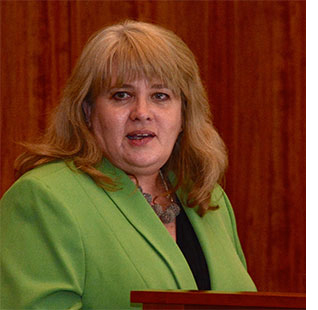 At NARA, she oversees a staff of about 60 people and is equipped with a several-million-dollar budget, she told Nextgov. Her team focuses on using social media, online catalogues, digitized records and other strategies to make NARA content more accessible to the public.

One such project is a History Hub pilot citizens could use to find experts on specific topics, within or outside NARA.

While Wright's responsibility is to “ignite innovation across the agency,” most of her work is front-end, involving elements of user-centric design—“ensuring that what the public wants is what we’re working on, as opposed to what we think they want,” she said.

Though internal cultural change is a smaller part of her job, Wright noted her team is about to launch a pilot in which NARA offices can submit proposals for which they’d like detailees from other parts of the agency. Those proposals would be posted on NARA’s existing internal software platform on which employees can comment and ask questions about other departments’ projects.

Unlike some innovation-themed hubs at other agencies, Wright said, her team is “not a skunkworks.” Wright is held accountable for metrics, and the projects she pitches are vetted by management before any investments are made.

But working within the vague umbrella of “innovation” can be challenging, she said.

“The word ‘innovation’ got bandied about so much that it’s one of those words that’s meaningless," she said. "I don’t know that it actually means too much other than ... you’re moving the agency forward."

Wright advised any incoming chief innovation officers to “ground yourself” in the agency’s specific goals and to avoid investing in projects “completely off from the flow of the core work of the agency.”

Chris Gerdes, chief innovation officer of Transportation Department, on leave from his post as director of Stanford University’s Center for Automotive Research

Being chief innovation officer of a large federal department reminds Gerdes of a scene in “Kung Fu Panda,” he told Nextgov. It’s “a lot like being the dragon warrior. You get the scroll, and it’s blank,” he said.

So far, Gerdes has been hosting workshops and training to help employees embrace creative thought. One of his main projects has been to teach techniques from improvisational comedy. Gerdes said he doesn’t have “much of a formal role in terms of decision-making,” but instead works with groups throughout the department to help them “address the challenges they’re facing,” instead of hosting broader idea-generation-themed events “in the abstract.”

Gerdes’ formal job description describes the chief innovation officer as the “chief facilitator of innovation,” looking for “opportunities and assisting senior leadership in obtaining the tools and connections necessary to successfully move those opportunities forward.”

Gerdes is also expected to help establish a “culture of innovation” and “creating mechanisms for DOT staff to prototype and develop their ideas,” according to the job description.

He advised incoming chief innovation officers to start by understanding who in a department is an expert in what, and encourage them to work together on specific problems.

Gerdes also suggested focusing on helping employees come up with their own ideas. Does the agency have a culture in which “people feel they have an outlet for their ideas where ideas are freely exchanged? Is it a culture where people put up ridiculous ideas and drive the discussion in different ways or is there a pressure against sharing?”

The “culture aspect, getting people to say crazier things and generate more open discussion—there’s real value in that, that shouldn’t be ignored,” Gerdes added.

Chang, previously a senior engineering director for Google, serves two roles simultaneously—first, as the chief innovation officer for USAID, and second, as head of its tech testbed, the Global Development Lab.

At the lab, Chang oversees investment in technology developed by universities, entrepreneurs in developing countries, and other sources.

“A lot of the things we do really are quantifiable,” she said. For instance, “how do we improve productivity and livelihoods for farmers in developing countries?”—in that case, perhaps by helping them better measure the weather.

As chief innovation officer, Chang has been promoting the use of broad agency announcements to share with the public problems that are “unsolved and require more research.” So far, she has advised the funding of 50 BAAs.

Chang said she doesn’t know too many other people in government with innovation-related titles.

“It’s still a new thing," she said. "I don’t think we’ve figured out the best ways to set it up to succeed."

“If you think of a standard innovation process, in the early stages, you sort of want to have as few walls as possible so that experimentation can happen, we’re sort of … I think over time, I would expect that there would be a little more uniformity,” Chang added.

“This is being used more in companies that are seeking to increase innovation,” instead of in companies already on the cutting edge, she explained.

“There’s a perception of innovation as if it’s really about sexy new ideas … just coming up with flash new things and not necessarily follow[ing] it through,” she said.

NEXT STORY: Navy Is Trying to Deal with Its Sexual Assault Problem by Giving Sailors a Reporting App