By Patrick Tucker,
Defense One

Fittingly, these rifle-sized weapons would gun for other electronics.

Pew! Pew! Soldiers with handheld energy blasters are the stuff of G.I. Joe, not real life … until now. The U.S Army is currently testing electricity guns for possible use against electronics on the battlefield. They don’t look like props from the popular cartoon show but, rather like regular standard-issue M4 rifles with a pair of antennas that shoot out from the barrel and then spread, giving the front end of the gun a musket-like shape.

Soldiers “already carry rifles. Why not use something that every soldier already carries,” said James E. Burke, an electronics engineer with the U.S.Army’s Armament Research, Development and Engineering Center, or ARDEC. Burke spoke with Defense One at a National Defense Industry Association event in Baltimore on Tuesday.

See the slide from Burke’s presentation below. 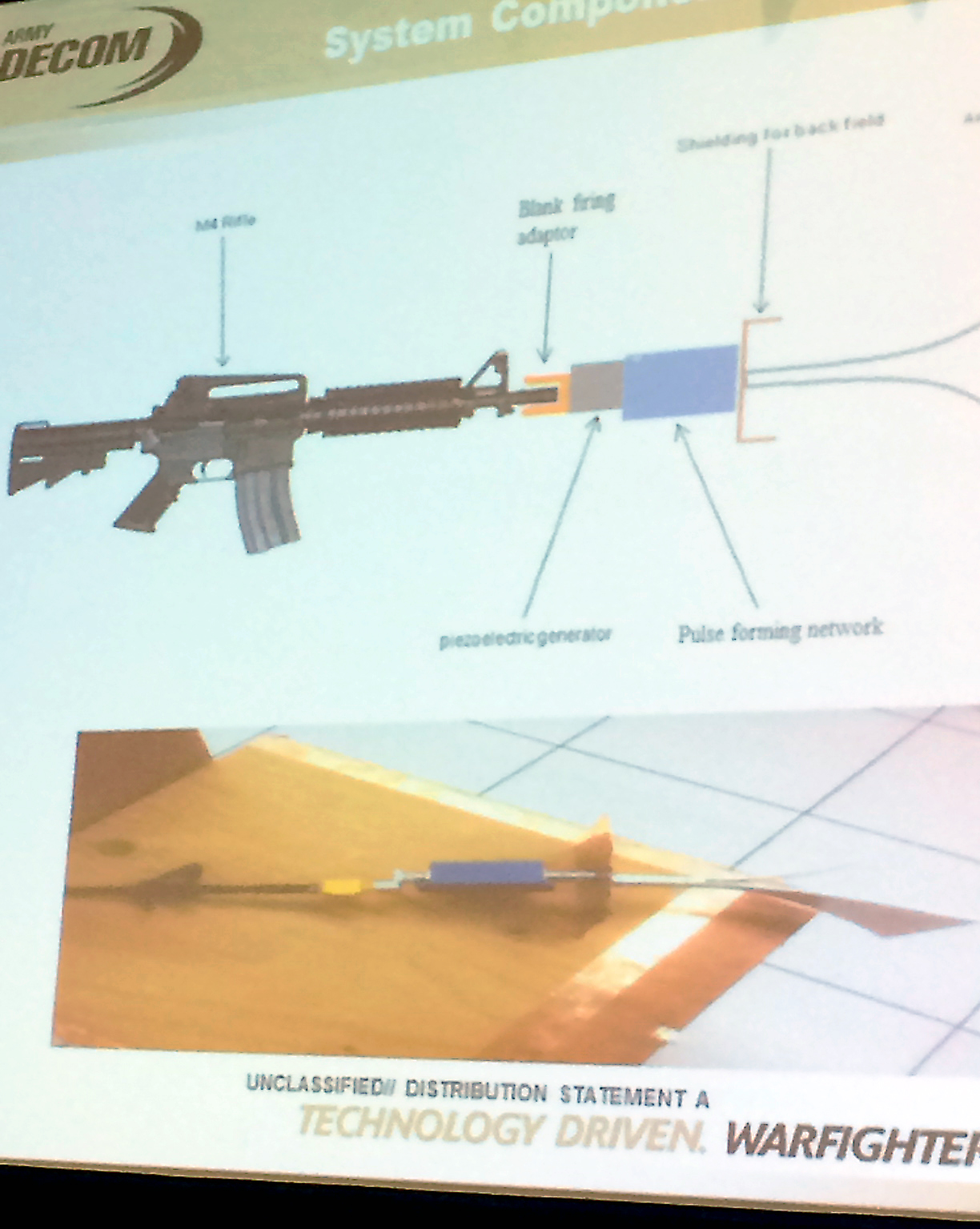 Burke’s apparatus, which he’s named the “Burke Pulser,” consists of two wide antennas, a piezoelectric generator and a few other small bits and pieces. It has a blast shield to protect the user from electricity levels that the inventor describes as “hazardous.”

The Pulser takes the explosive energy released when the gun fires and converts it into pulses of electrical energy. This is done via the piezoelectric effect, which derives an electric charge when pressure is exerted on crystalline materials such as quartz, changing the balance of positive and negative ions.

The Pulser isn’t the first electricity gun ever invented. One of the more interesting prototypes that have emerged over the last several years came from, Seattle-based hacker Rob Flickenger , who cast a Nerf gun in aluminum and rigged it to shoot 20,000 volts of electricity a short distance. (See the video below.)

The military, too, has been experimenting with so-called energy weapons for decades, including lasers. “Most of these are vehicle-towed and require a huge power system,” Burke noted. “The antennas are sometimes seven feet.” The Burke Pulser, meanwhile, fits onto an M4 rifle like a standard suppressor. Burke estimates that the cost to mass-produce them would be less than $1,000 each.

What do you do with an energy gun? You don’t shoot people. The gun is intended for use against electronics, potentially giving dismounted soldiers an edge against the ever-wider range electronic and cyber threats that they might face on patrol:Bluetooth-enabled improvised explosive devices, consumer drones modified to be more deadly, and the like.

The Army is currently testing the Pulser against an assortment of devices, a 555 timer, a bipolar junction transistor and a yellow light emitting diode, or LED, combined into a single target. “All these things pretty much generalize all the common electronics you’ll find in a circuit board,” Burke said.“What we’re going to do is fire at it. If the LED light stops blinking, it was defeated and if smoke comes up, it was destroyed.”

As for the range, “we’re still investigating,” said Burke The capabilities measured so far “turn classified very quickly.” He couldn’t go into detail about how the tests were progressing, but he called them “very promising.”

NEXT STORY: Advice for Job-Switchers and Newbies From Google’s Hiring Chief