Obama has the most followers, but Pope Francis gets the most engagement.

The 2008 and 2012 presidential campaigns of Barack Obama were lauded for their digital acumen and, specifically, the camp's use of social media. According to a new study, Obama has translated those Twitter skills to the White House, though he sometimes lags behind other world leaders in engagement.

The official White House account ranks fourth on the list and is separate from the @BarackObama account, which is run by Obama's nonprofit Organizing for Action (the organization closely tied with the Obama campaigns and Obama for America). The United States government has already reserved @POTUS in case Obama's successor decides to use the account for official purposes. The account is currently private, so information about number of accounts it follows or tweets it has posted is not available. Vice President Joe Biden tweets via the official U.S. government @VP account, which has 317,000 followers. 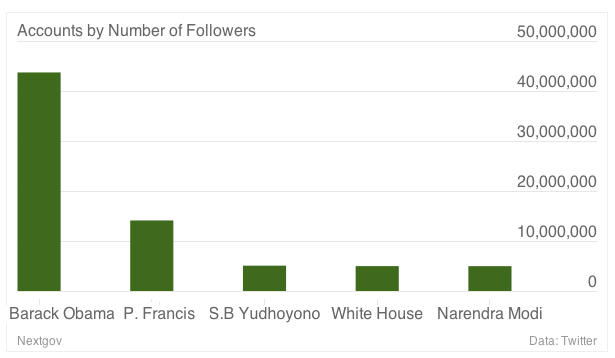 While Obama's account has the most followers by a wide margin, the president's engagement metrics and frequency of tweets are not as high as other accounts. The official account of the Mexican president ( @PresidenciaMX ) has proven to be the most prolific since joining the service in 2009, posting on average 78 tweets per day. The official account of the Venezuelan presidency ( @PresidencialVen ) has posted nearly 50,000 tweets, averaging almost 40 tweets per day. Since Jan. 1, 2014, Obama's account has posted 1,283, averaging about seven tweets per day.

After his re-election in November 2012, Obama posted a photo of he and first lady Michelle Obama embracing.

The tweet became the most retweeted post -- more than 700,000 users retweeted it -- on the service until Ellen DeGeneres' Oscar photo surpassed it 18 months later.

Despite single events such as his re-election, Obama lags behind other world leaders in engagement. Obama's tweets are on average only retweeted 1,442 times, while each of Pope Francis' Spanish-language tweets averages around 10,000 retweets. Among his most retweeted posts include a tweet asking users to pray for him, which has been retweeted more than 28,000 times.

Obama's Twitter presence, comparatively, eschews Twitter diplomacy. While Obama is followed by 222 other leaders, his account only follows two other world leaders: Norway’s Prime Minister Erna Solberg ( @Erna_Solberg ) and Russia’s Dmitry Medvedev ( @MedvedevRussiae ). The Obama personal account stays out of tweeting about antyhing but domestic policy, while the White House account sends users to live streams of Obama press conferences on diplomacy or posts quotes from Obama on foreign or military policy . Neither account tweets at other foreign leaders on Twitter.

Like regular Twitter users, the study says, world leaders "vie for attention, connections and followers on Twitter" via their accounts. Like a former college classmate, the Obama account is not above posting links to petitions , name-dropping celebrities or pushing adorable photos on its followers.

Obama is the first world leader to sign onto the service, having joined in March 2007, a year after Twitter launched. The then-senator's first tweet was seven weeks later, urging users to sign a petition against then-being waged war in Iraq.

Thinking we're only one signature away from ending the war in Iraq. Learn more at http://www.barackobama.com

Most world leaders starting using Twitter in 2010 and 2011, with only 126 of the 642 current accounts having been activated before 2010 . In 2011 alone, 154 leaders signed up for Twitter. In all, 161 of the 193 United Nations members state governments have a presence on the service, with most of the nonusers coming from Africa and the central Pacific.