Behind the Numbers: Amid Financial Uncertainty, Data Visualization Spurs Economic Recovery
Skip to Content
Get the latest federal technology news delivered to your inbox.

It, however, has a lot of limitations.

Facebook founder Mark Zuckerberg must have only reluctantly offered up his company’s Christmas gift to users in the U.S. and U.K. Very quietly, on Dec. 22, the Friday before Christmas, Facebook rolled out a tool for users to check their engagement with Russian propaganda. It appeared on the site with no official announcement.

Presumably, the social media giant wants to regain lost trust and maintain relevance after admitting Russian propagandists manipulated the platform’s readers during critical 2016 political events, like the U.S. election and the U.K.’s Brexit vote. Facebook first announced it was developing the tool in November. On Dec. 22, the news that it was live could be found on the top of a Facebook Help Center page entitled “What is our action plan against foreign interference?” 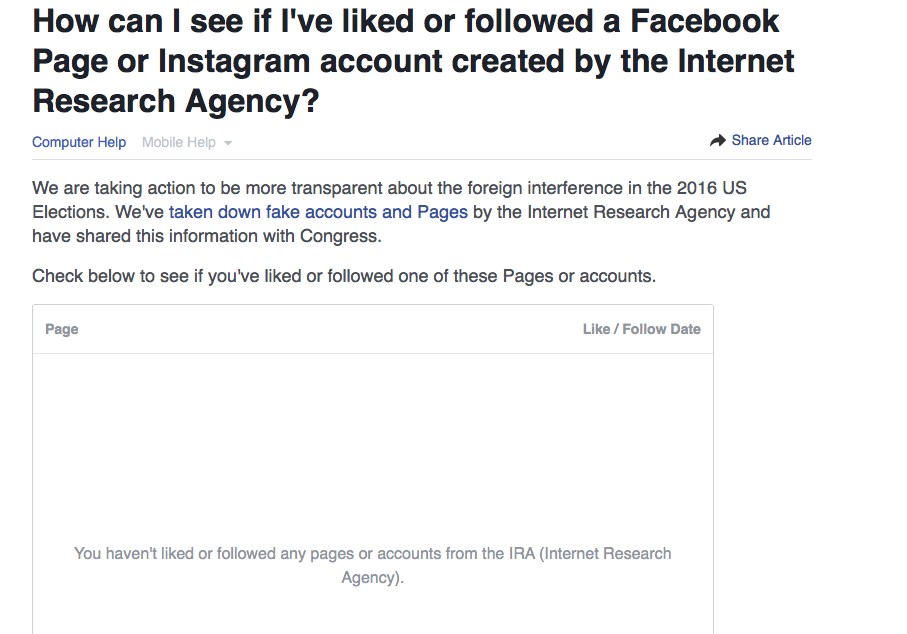 Quartz was unable to find any other promotion or integration of the tool on Facebook’s platform. A company spokesman told The Guardian that Facebook “will make a significant effort to alert people to the tool,” offering no additional details.

The tool also has lots of limitations. All it does is tell you whether you’ve actively followed the Russian propagandist group called the Internet Research Agency or liked a story shared by the agency. It will not tell you, however, whether you’ve read an article shared by the agency without liking the post or following the organization. Nor will it reveal if you’ve engaged with any other Russian or foreign or local fake newsmakers. It also doesn’t yet seem to work for all users—a Quartz employee based in New York tried to use it and was told “This feature isn’t available in your location right now.”

In late 2016, Zuckerberg adamantly denied Facebook could be manipulated to sway the U.S. election. In September this year, company executives admitted that Russian operatives bought ads on the platform to influence American politics, and that they likely had not yet grasped the full scope of their company’s propaganda problem. Forced to revise his position, Zuckerberg then announced a somewhat begrudging position on propaganda in a lengthy Sept. 21 Facebook post that ended as follows:

It is a new challenge for internet communities to deal with nation states attempting to subvert elections. But if that’s what we must do, we are committed to rising to the occasion. Our sophistication in handling these threats is growing and improving quickly. We will continue working with the government to understand the full extent of Russian interference, and we will do our part not only to ensure the integrity of free and fair elections around the world, but also to give everyone a voice and to be a force for good in democracy everywhere.

Now, Facebook is taking steps in this direction, including the introduction of this new tool. But given the company track record, it’s worth maintaining some skepticism.

NEXT STORY: There’s a Reason Why iPhones Get Slower After Every iOS Update