The vision of the technology-powered metropolis of the future is being sold with images that bear little resemblance to the real world.

Suddenly, the world is awash in smart cities. Google is about to build one in Toronto. Hudson Yards in New York City is one, kind of. China and India have both declared national missions to construct or retrofit dozens of smart city projects all at once. And global tech giants and startups are racing to offer customers urban dashboards, “smart’’ systems, and new-age transit networks to make life happier and more efficient.

But no one seems able to agree on what a smart city actually is. Are they “the intersection of digital technology, disruptive innovation and urban environments”? Or “a place where traditional networks and services are made more efficient with the use of digital and telecommunication technologies”? To some, they’re a revolutionary “blueprint for the 21st-century urban neighborhood” that merges the “physical and digital realms.”

There is one thing everyone throwing their hat into this ring does agree on: The smart city market will be worth a lot of money. One study pegged this figure at $238 billion globally by 2025.

But for the most part, at this point smart cities are just pictures accompanied by hot air and marketing verbiage. Despite some stylistic difference, these images all speak the same basic language—sleek and a bit soulless, but striking enough to perk up any boardroom. Lets take a little tour into the technocrat brain.

Perhaps the most well-known smart city project is Google sibling company Sidewalk Labs’ experiment in Quayside, Toronto. This 12-acre waterfront development is supposed to represent the answer to former Google executive chair Eric Schmidt’s question: What would Google do “if someone would just give us a city and put us in charge”?

For many months, Sidewalk was a little hesitant to reveal the inner workings of what “being in charge” would actually look like. But this week, the company dropped a 1,500-page master plan for the city-within-a-city, full of elaborately detailed renderings of future Quaysiders romping amid the site’s wooden skyscrapers. Like the bucolic visions of spinning rural space-habitats from 1970s futurism, these are scenes of a world where a familiar-looking future has already arrived. Everything is built, and a “virtuous cycle” of growth has turned Quayside into a beautiful place to live: There are plants and trees and dogs everywhere, people sailing and flying kites, and crowds of people strolling unhurriedly down the esplanade of a lush garden city. The most high-tech thing on display here is a kayak. Whatever technology present here diffuses into the background, and a sense of “community” is front and center.

By depicting vibrant streetscapes that steer clear of the cyber/solarpunk displays of most smart city visualizations, Sidewalk tries to project maturity: They convey a “welcoming tone” that has learned to “speak urbanism.” But what we’re seeing here is humanist window dressing. Those aren’t representations of living people enjoying the city—to Sidewalk, they’re just data inputs.

Sidewalk’s trick is making it look like they’re doing something they’re not, like making a neighborhood instead of building a huge behavioral data farm.

Other technologists aren’t nearly as subtle.

Just look at this thing. Taken from Deloitte’s 2015 Smart Cities report, this graphic gathers up several disparate “smart” industries and bolts them together on an “exponential growth trajectory” that takes Moore’s Law—that speed and capacity of computers double every two years—as a historical constant. The interactions between these technologies are not entirely clear (how do 3D-printed aircraft parts play off water purification?), other than they’re all “futuristic.” The point isn’t to provide a realistic assessment of these technologies, but to show that technological progress is taking society itself for a ride.

This fanatic belief that technology has society by the horns, or that it solves problems, has been dubbed technochauvinism by Meredith Broussard, author of the recent book Artificial Unintelligence: How Computers Misunderstand the World. Technochauvinism predicates itself on having all the answers—on being smart. And if being smart means having tech and the ability to use it, then the smart few can make a lot of money.

But since making money here requires not selling technology so much as selling the idea of a technological world-to-come, this graph isn’t enough. We need to see them in action. We need a representation of pure technology, infrastructure, capital-U Urbanism, with none of the messy stuff like people or community required. 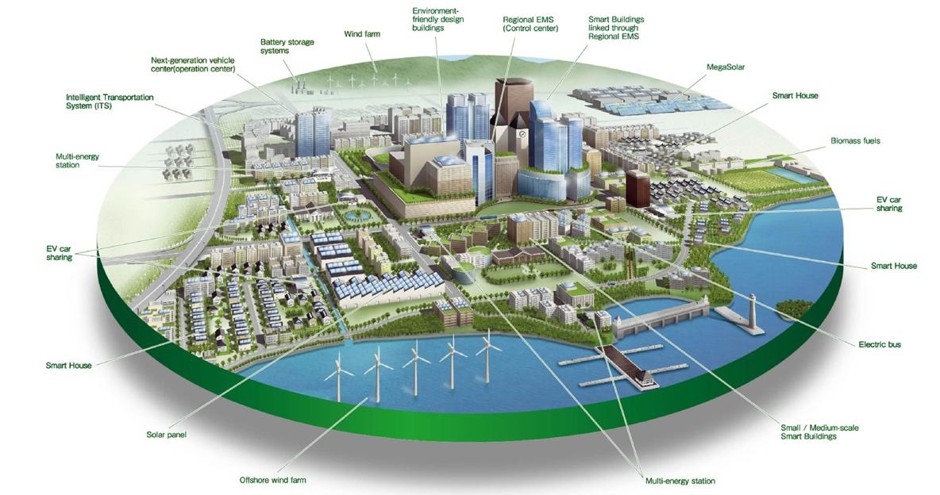 That’s what this image is for. Compare this to Sidewalk Labs’ depiction of a busy urban street. Unlike that performatively human-oriented representation, here we’re looking with the god’s eye view from nowhere, at a petri dish or discworld diagram of a city.

This image is extraordinarily popular, though it seems to have come out of nowhere (the earliest one I found is an uncredited upload on a re-hosting site in 2012). It shows up in the presentations of European think tanks, Indian government agencies, French telecoms, Uruguayan entrepreneurs, Gizmodo writers, American energy titans, and in countless market reports and write-ups. The city itself could be anywhere—universal by way of indistinguishability.

The city shown is stuffed with technological enhancements, none of which actually exist yet. But just like Deloitte’s graph and Sidewalk’s streetscape, what is being sold here is an idea of a smart city, crowning the exponential slope of runaway technological progress. The point of this idea is to give the vague, watery idea of technological progress a bit of real-life heft by packing any possible “future tech” into the head of a pin, where all problems have been solved and the technochauvinist scheme has been totally vindicated.

All these images are illusions of progress or spaces where progress can be hosted. Just as suburbs were sold to postwar America as an idea of living, the smart city is a vehicle to sell a focus-grouped future. But these marketing images aren’t selling smart cities to you and me—they’re made to demonstrate that the city is a place where profits stand to be made. The smart city isn’t a technological utopia, or an environmental lifeboat. It’s a few PowerPoint slides in a conference room demonstrating that there’s money to be made. And it’s coming to you soon.

NEXT STORY: How to Fight a Security Fire Within 72 Hours