By Eric Levenson,
The Wire

By Eric Levenson,
The Wire

Sharpie notes and other indications astronauts were there.

Graffiti isn't just for troublemakers and wanna-be artists anymore. Astronauts on the International Space Station are now tagging in outer space, and it's just one of many odd interests astronauts have placed in outer space.

In the outer space equivalent of carving "I was here" into a park tree, Italian astronaut Luca Parmitano left his mark several weeks back with a visible Sharpie message: 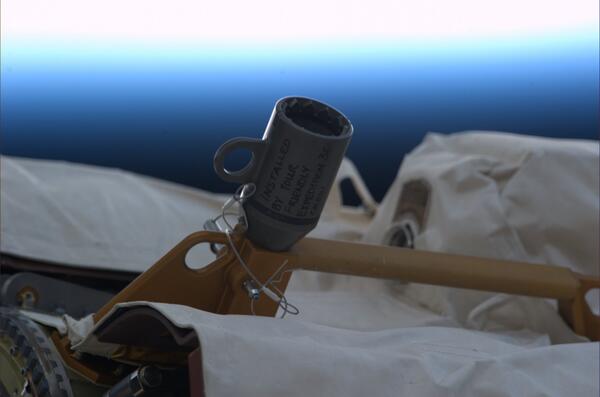 It's tough to see, but the black letters read: "Installed by your friendly Expedition 36 Crew." Inspired by this inscription, Universe Today looked into other hidden messages in outer space, and they did not come up empty, as NASA astronaut Tom Marshburn explained:

“We did a lot of maintenance during our flight and rotated out a lot of the experiment racks and we saw many signatures on the internal hull or on the inside parts of the racks,” Marshburn told Universe Today via phone from Johnson Space Center. “Things like ‘Greetings from the Water Recovery team!’ with everyone’s signature. That’s fairly prevalent on the inside, particularly behind the racks, but not in plain view.”

Read the rest at TheAtlanticWire.com.

NEXT STORY: Bill Gates Admits That CTRL-Alt-Delete Was a Mistake