One-third of senior federal executives use their personal smartphones and laptop computers to conduct agency business, according to a recent survey by the Government Business Council, Government Executive Media Group's research division.

The 148 survey respondents were all high-ranking government officials, either at the General Schedule 15 level or in the Senior Executive Service.

The results suggest government executives could benefit from a more diverse array of agency-provided devices. They also indicate some executives might be using personal tablets for work despite security concerns and prohibitions.

Veterans Affairs Department Chief Information Officer Roger Baker has warned that if the government doesn't find a way to allow employees to securely use iPads and other technology, they will find a way to use them nonetheless.

He specifically cited VA doctors who could cut down on time, miscommunication and even medical errors by accessing and entering patient information on a handheld tablet. VA won't allow patient information to be held on any platform that's not highly secure, though.

Baker has committed his agency to widening its array of acceptable computing devices and predicted most federal agencies will be "device agnostic" within two years. Other agency CIOs have made similar goals, including State Department CIO Susan Swart.

Device agnosticism likely would include allowing employees to use Apple's iPhone and Goolge's Android phone, which consumers say offer more navigability than the government-preferred BlackBerry but are currently less secure.

Baker himself used a Kindle to read agency documents during his train rides home, before his chief security officer forced him to quit, calling the tablet reader "one huge unencrypted USB stick with no pin," he said.

Other results from the Government Business Council's survey of federal executives are available in "The Chiefs" special issue of Government Executive magazine published June 15. 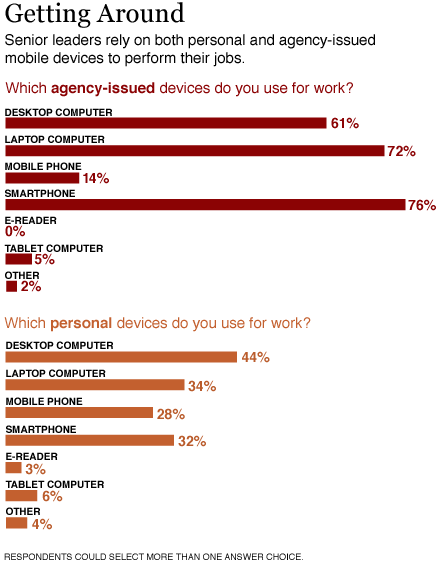