U.S. trails behind leaders South Korea and Australia, among others.

Despite moves by the Obama administration toward digital transparency and open data, the U.S. government now ranks seventh worldwide in e-government, down two spots since 2012, according to a United Nations report on the matter.

Released Wednesday, the E-Government for the Future We Want report contrasted the 185 U.N. members by the E-Government Development Index. The EGDI is made up by three components of e-government: online service index, human capital index, and information and communications technology. South Korea ranked first, with Australia, Singapore, France and the Netherlands rounding out the top five.

The U.S. government received praise for its adoption of mobile-friendly services by the report. In a section noting mobile use, the report lauded the Obama administration for its open data prioritization and its use of apps in delivering services to citizens in its digital government plan.

President Barack Obama has made e-government a priority since taking office in 2008 and signed an open data executive order in 2013. Data.gov, the federal government's data repository, turned 5 in May . The report cited U.S. efforts to support progress in e-government, as well as in its human capital.

The United States of America has taken important steps to drive technology towards sustainable growth and quality jobs through policies that support innovation and education. It has also customized its digital agenda to fit the new tendencies and needs of its citizens, such as cloud computing, smart mobile devices, tablets and high speed networks.

The report also lauded the federal government's moves toward employing more chief data officers at agencies, saying CDOs are "one common need within government agencies" and citing FCC's appointment of CDOs at "at every one of its major bureaus."

Regionally, Europe led the rankings with 16 of the 25 nations in the "Very High EGDI" category and a regional EGDI average of 0.69. The U.S. and Canada were the only two nations from the Americas in that category. The Americas region's average EGDI came in at 0.51.

E-government capacity is highly correlated to the U.N.'s Human Development Index because of the necessary access to technology infrastructure and education. Nations that lack these factors often do not realize the full potential of e-government efforts because citizens are unable to interact with e-government. 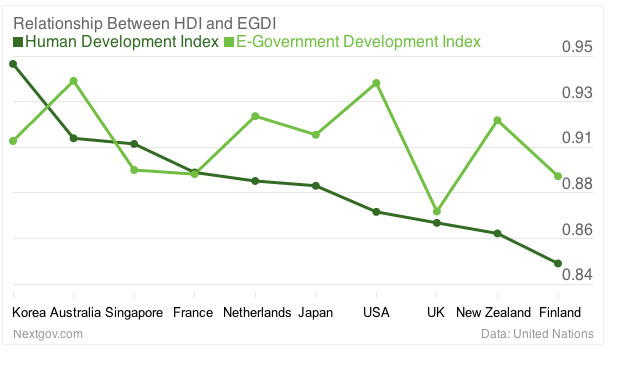 The Human Capital Index for North America is much higher than the HCI for all the other subregions: Canada and the U.S. have an average HCI of 0.9170, while in the rest of the continent this index oscillates around 0.70. The U.S. HCI of 0.9390 is third worldwide to Australia's 0.9978 and Ireland's 0.9619. The Human Capital Index measures schooling, adult literacy and other technological literacy components.

The U.S. fell two spots since the last EGDI rankings in 2012, as Japan, Australia and Singapore leapfrogged the nation. Japan jumped 18 places from 2012-2014, largely thanks to creating a new IT reform strategy. The Japanese program "allowed almost all applications and other forms used by the national government to be submitted online." 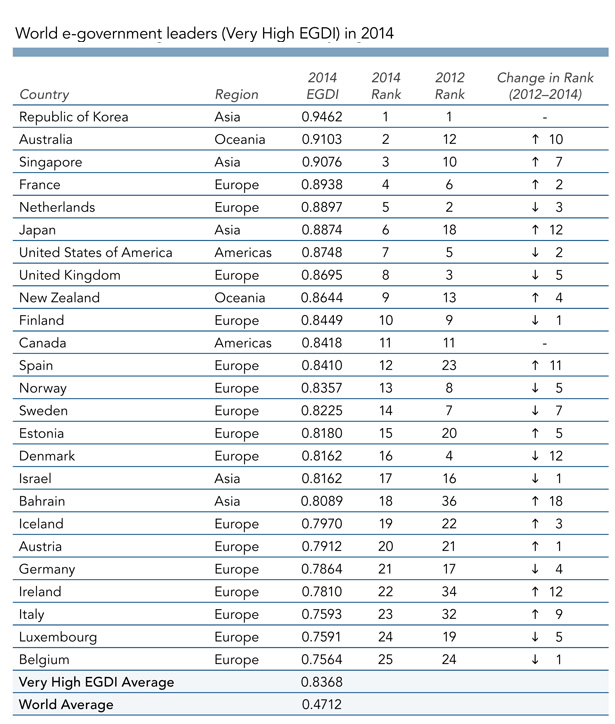